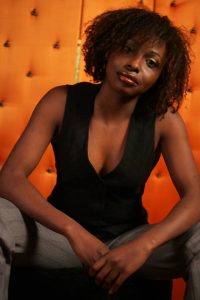 Specialist in African Literature, Adrienne graduated with a diploma in Ritual Theatre at “l’Université Paris Ouest” with acquired techniques from “Were Were Liking” and “Manu Na Njock” (therapeutic theatre). She has been a theatre instructor for almost 10 years with experience in France and Canada.

Some of her experience as a stage director comes from writing and directing « Palabre de femmes » and presenting it in France and Canada long with the help of the Ethny group. This play aided in creating awareness in regards to various issues women have. Furthermore, another play entitled « Moi, mon reflet dans le regard des autres », also written and directed by Adrienne, helped create awareness about social exclusion and the problems that arise with it.

In addition, she also is a skilled story-teller. She has written and acted in short stories for children and adults based on historical events to educate her audience on Africa, Canadian, Asian, European and Latin American cultures. Since 2010, she has been a part of the “Festival International de Littérature de Montreal Métropolis Bleu” in which she was presented as author and story-teller who wrote and presented works such as Izerka la reine Kemet (co-written by Carolina Cortes), Kamba la petite fille du Kasaï, Tchanda le guerrier bantou, Asaia: l’esprit Masai, Kongolo et les valeurs perdues.

Adrienne loves to initiate projects that seem out of the box in regards to social and psychological issues. This is how she develops her creativity all the while dedicating herself to working with various individuals, notably minorities for the noble purpose of sensitizing them to be more implicated in the contemporary society.

Professional dancer for over 15 years, Adrienne has past performances in France, Germany and Canada under her belt. Her specialty revolves around artistic creativity. She quickly found herself more adept as a choreographer rather than a dancer by creating choreographies for festivals and shows such as Sista Move (Rennes, France), Festival de la Villette (Paris, France), Djins (Le Gesu, Montreal, Canada) as well as Cabaret (Union Francaise de Montreal, Canada). Putting various issues in society under a theatrical light is the common factor in her works and what distinguishes her from her counter-parts.